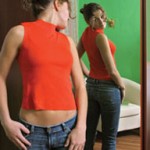 It's only human to wish you looked different or could fix something about yourself. But when a preoccupation with being thin takes over your eating habits, thoughts, and life, it's a sign of an eating disorder. When you have anorexia, the desire to lose weight becomes more important than anything else. You may even lose the ability to see yourself as you truly are.

Anorexia is a serious eating disorder. It can damage your health and even threaten your life. But you're not alone. There's help available when you're ready to make a change. You deserve to be happy. Treatment will help you feel better and learn to value yourself.

What is anorexia nervosa?

Seventeen-year-old Maria has been on one diet or another since she was in junior high. She recently lost 10 pounds from an already slender frame after becoming a strict vegetarian. Her parents are concerned about the weight loss, but Maria insists that she’s just under stress at school. Meanwhile, her vegetarian diet is becoming stricter by the day.

Maria obsessively counts calories, measures food portions, and weighs herself at least twice a day. She refuses to eat at restaurants, in the school cafeteria, or anywhere else in public, and she lives on salad dressed with vinegar, rice cakes, and sugar-free Jello. Maria also has a large stash of fat-free candy in her room. She allows herself to indulge as long as she goes for a run right afterwards.Anorexia nervosa is a complex eating disorder with three key features:

Because of your dread of becoming fat or disgusted with how your body looks, eating and mealtimes may be very stressful. And yet, what you can and can’t eat is practically all you can think about.

Thoughts about dieting, food, and your body may take up most of your day—leaving little time for friends, family, and other activities you used to enjoy. Life becomes a relentless pursuit of thinness and going to extremes to lose weight.

But no matter how skinny you become, it’s never enough.

While people with anorexia often deny having a problem, the truth is that anorexia is a serious and potentially deadly eating disorder. Fortunately, recovery is possible. With proper treatment and support, you or someone you care about can break anorexia’s self-destructive pattern and regain health and self-confidence.

Anorexia is not about weight or food

Believe it or not, anorexia isn’t really about food and weight—at least not at its core. Eating disorders are much more complicated than that. The food and weight-related issues are symptoms of something deeper: things like depression, loneliness, insecurity, pressure to be perfect, or feeling out of control. Things that no amount of dieting or weight loss can cure.

What need does anorexia meet in your life?

It’s important to understand that anorexia meets a need in your life. For example, you may feel powerless in many parts of your life, but you can control what you eat. Saying “no” to food, getting the best of hunger, and controlling the number on the scale may make you feel strong and successful—at least for a short while. You may even come to enjoy your hunger pangs as reminders of a “special talent” that most people can’t achieve.

Anorexia may also be a way of distracting yourself from difficult emotions. When you spend most of your time thinking about food, dieting, and weight loss, you don’t have to face other problems in your life or deal with complicated emotions.

Unfortunately, any boost you get from starving yourself or shedding pounds is extremely short-lived. Dieting and weight loss can’t repair the negative self-image at the heart of anorexia. The only way to do that is to identify the emotional need that self-starvation fulfills and find other ways to meet it.

Signs and symptoms of anorexia

Living with anorexia means you’re constantly hiding your habits. This makes it hard at first for friends and family to spot the warning signs. When confronted, you might try to explain away your disordered eating and wave away concerns. But as anorexia progresses, people close to you wont be able to deny their instincts that something is wrong—and neither should you.

As anorexia develops, you become increasingly preoccupied with the number on the scale, how you look in the mirror, and what you can and can’t eat.

There are no simple answers to the causes of anorexia and other eating disorders. Anorexia is a complex condition that arises from a combination of many social, emotional, and biological factors. Although our culture’s idealization of thinness plays a powerful role, there are many other contributing factors, including your family environment, emotional difficulties, low self-esteem, and traumatic experiences you may have gone through in the past.

People with anorexia are often perfectionists and overachievers. They’re the “good” daughters and sons who do what they’re told, excel in everything they do, and focus on pleasing others. But while they may appear to have it all together, inside they feel helpless, inadequate, and worthless. Through their harshly critical lens, if they’re not perfect, they’re a total failure.

In addition to the cultural pressure to be thin, there are other family and social pressures that can contribute to anorexia. This includes participation in an activity that demands slenderness, such as ballet, gymnastics, or modeling. It also includes having parents who are overly controlling, put a lot of emphasis on looks, diet themselves, or criticize their children’s bodies and appearance. Stressful life events—such as the onset of puberty, a breakup, or going away to school—can also trigger anorexia.

Research suggests that a genetic predisposition to anorexia may run in families. If a girl has a sibling with anorexia, she is 10 to 20 times more likely than the general population to develop anorexia herself. Brain chemistry also plays a significant role. People with anorexia tend to have high levels of cortisol, the brain hormone most related to stress, and decreased levels of serotonin and norepinephrine, which are associated with feelings of well-being.

One thing is certain about anorexia. Severe calorie restriction has dire physical effects. When your body doesn’t get the fuel it needs to function normally, it goes into starvation mode and slows down to conserve energy. Essentially, your body begins to consume itself. If self-starvation continues and more body fat is lost, medical complications pile up and your body and mind pay the price.

Some of the physical effects of anorexia include:

Getting help for anorexia

Deciding to get help for anorexia is not an easy choice to make. It’s not uncommon to feel like anorexia is part of your identity—or even your “friend.”

You may think that anorexia has such a powerful hold over you that you’ll never be able to overcome it. But while change is hard, it is possible.

It may seem like there’s no escape from your eating disorder, but recovery is within your reach. With treatment, support from others, and smart self-help strategies, you can overcome bulimia and gain true self-confidence. Read Eating Disorder Treatment and Recovery.

Since anorexia involves both mind and body, a team approach to treatment is often best. Those who may be involved in anorexia treatment include medical doctors, psychologists, counselors, and dieticians. The participation and support of family members also makes a big difference in treatment success. Having a team around you that you can trust and rely on will make recovery easier.

The first priority in anorexia treatment is addressing and stabilizing any serious health issues. Hospitalization may be necessary if you are dangerously malnourished or so distressed that you no longer want to live. You may also need to be hospitalized until you reach a less critical weight. Outpatient treatment is an option when you’re not in immediate medical danger.

A second component of anorexia treatment is nutritional counseling. A nutritionist or dietician will teach you about healthy eating and proper nutrition. The nutritionist will also help you develop and follow meal plans that include enough calories to reach or maintain a normal, healthy weight.

Counseling and therapy for anorexia

Counseling is crucial to anorexia treatment. Its goal is to identify the negative thoughts and feelings that fuel your eating disorder and replace them with healthier, less distorted beliefs. Another important goal of counseling is to teach you how to deal with difficult emotions, relationship problems, and stress in a productive, rather than a self-destructive, way.

Getting past your fear of gaining weight

Getting back to a normal weight is no easy task. The thought of gaining weight is probably extremely frightening—especially if you’re being forced—and you may be tempted to resist. But research shows that the closer your body weight is to normal at the end of treatment, the greater your chance of recovery, so getting to a healthy weight should be a top treatment goal.

Try to understand that your fear of gaining weight is a symptom of your anorexia. Reading about anorexia or talking to other people who have lived with it can help. It also helps to be honest about your feelings and fears—including your family and your treatment team. The better they understand what you’re going through, the better support you’ll receive.

Encouraging an anorexic friend or family member to get treatment is the most caring and supportive thing you can do. But because of the defensiveness and denial involved in anorexia, you’ll need to tread lightly. Waving around articles about the dire effects of anorexia or declaring “You’ll die if you don’t eat!” probably won’t work. A better approach is to gently express your concerns and let the person know that you’re available to listen. If your loved one is willing to talk, listen without judgment, no matter how out of touch the person sounds.

It’s deeply distressing to know that your child or someone you love may be struggling with anorexia. There’s no way to solve the problem yourself, but here are a few ideas for what you can do now to help make a difference for someone you love.

Tips for helping a person with anorexia