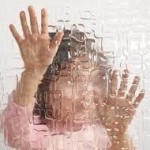 Asperger syndrome (AS), also known as Asperger’s syndrome, Asperger disorder or informally Asperger’s, is an autism spectrum disorder (ASD) that is characterized by significant difficulties in social interaction, alongside restricted and repetitive patterns of behavior and interests. It differs from other autism spectrum disorders by its relative preservation of linguistic and cognitive development. Although not required for diagnosis, physical clumsiness and atypical use of language are frequently reported.

The syndrome is named after the Austrian pediatrician Hans Asperger who, in 1944, studied and described children in his practice who lacked nonverbal communication skills, demonstrated limited empathy with their peers, and were physically clumsy. The modern conception of Asperger syndrome came into existence in 1981 and went through a period of popularization, becoming standardized as a diagnosis in the early 1990s. Many questions remain about aspects of the disorder. For example, there is doubt about whether it is distinct from high-functioning autism (HFA); partly because of this, its prevalence is not firmly established. It has been proposed that the diagnosis of Asperger’s be eliminated, to be replaced by a diagnosis of autism spectrum disorder on a severity scale.

The exact cause is unknown. Although research suggests the likelihood of a genetic basis, there is no known genetic etiology and brain imaging techniques have not identified a clear common pathology. There is no single treatment, and the effectiveness of particular interventions is supported by only limited data. Intervention is aimed at improving symptoms and function. The mainstay of management is behavioral therapy, focusing on specific deficits to address poor communication skills, obsessive or repetitive routines, and physical clumsiness. Most children improve as they mature to adulthood, but social and communication difficulties may persist. Some researchers and people with Asperger’s have advocated a shift in attitudes toward the view that it is a difference, rather than a disability that must be treated or cured.