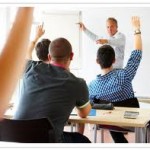 Depression in Childhood and Adolescence is a mood disorder that affects children under the age of 18.
The symptoms of depression in childhood are similar to adult major depressive disorder, with the exception that children may also exhibit an extended and irritable mood, rather than sadness Children under stress, who experience loss or who have attentional, learning, conduct, or anxiety disorders, are at a higher risk for depression. Child depression is often comorbid with other mental disorders, most commonly anxiety disorder and conduct disorder. Depression also tends to run in families. Psychologists have developed different treatments to help assist children and adolescents suffering from depression. Throughout the emergence of this disorder, there have been multiple controversies that have surfaced, such as the legitimacy of the diagnosis, as well as the most effective assessment and treatment.